The findings of this study highlight the need for greater research, well-developed materials and customized content for diverse demographics, and advocacy within communities to ensure that anti-racism teachings are sought out and implemented.

MuslimARC launched the first nationwide study of Muslim American views on race relations on December 8, 2014. The survey aimed to reach “mosqued” and “unmosqued” Muslims by utilizing the power and membership of social media, national Muslim organizations, student groups, social networks and personal contacts. MuslimARC reached out to many diverse Muslim groups to determine perspectives on race relations, segregation of Muslim populations, and personal experiences with race within Muslim communities and in North American societies at large. 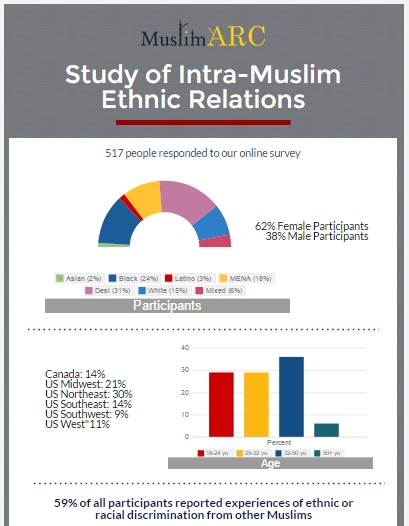 59% of all participants reported experiences of ethnic or racial discrimination from other Muslims.

The data was self-reported views and attitudes about the state of race relations within Muslim communities, utilizing the Likert scale to gather quantitative data, as well as open ended questions for qualitative analysis. The open ended questions were analyzed and coded to look for themes, patterns, and tropes.

The findings of this survey were put into context of current scholarship on Critical Muslim Studies, Islamophobia, and African American Islam. The research team offered some suggestions for educators and counselors to take into account given the multiple racial stressors upon Muslim students, including the feelings of alienation that Black American Muslim college students face on campuses across the country. The findings of this study highlight the need for greater research, well-developed materials and customized content for diverse demographics, and advocacy within communities to ensure that anti-racism teachings are sought out and implemented. Without deliberate action taken on these issues, Muslims of all ages will continue to face discrimination, and a result, our communities will continue to fragment. 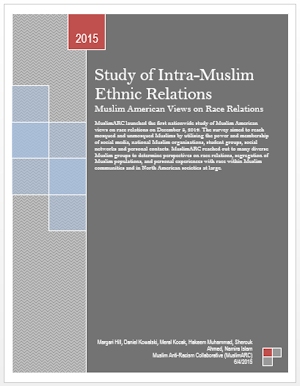 Read or download the study in magazine format here.

Download the study as a PDF via Google Drive here.