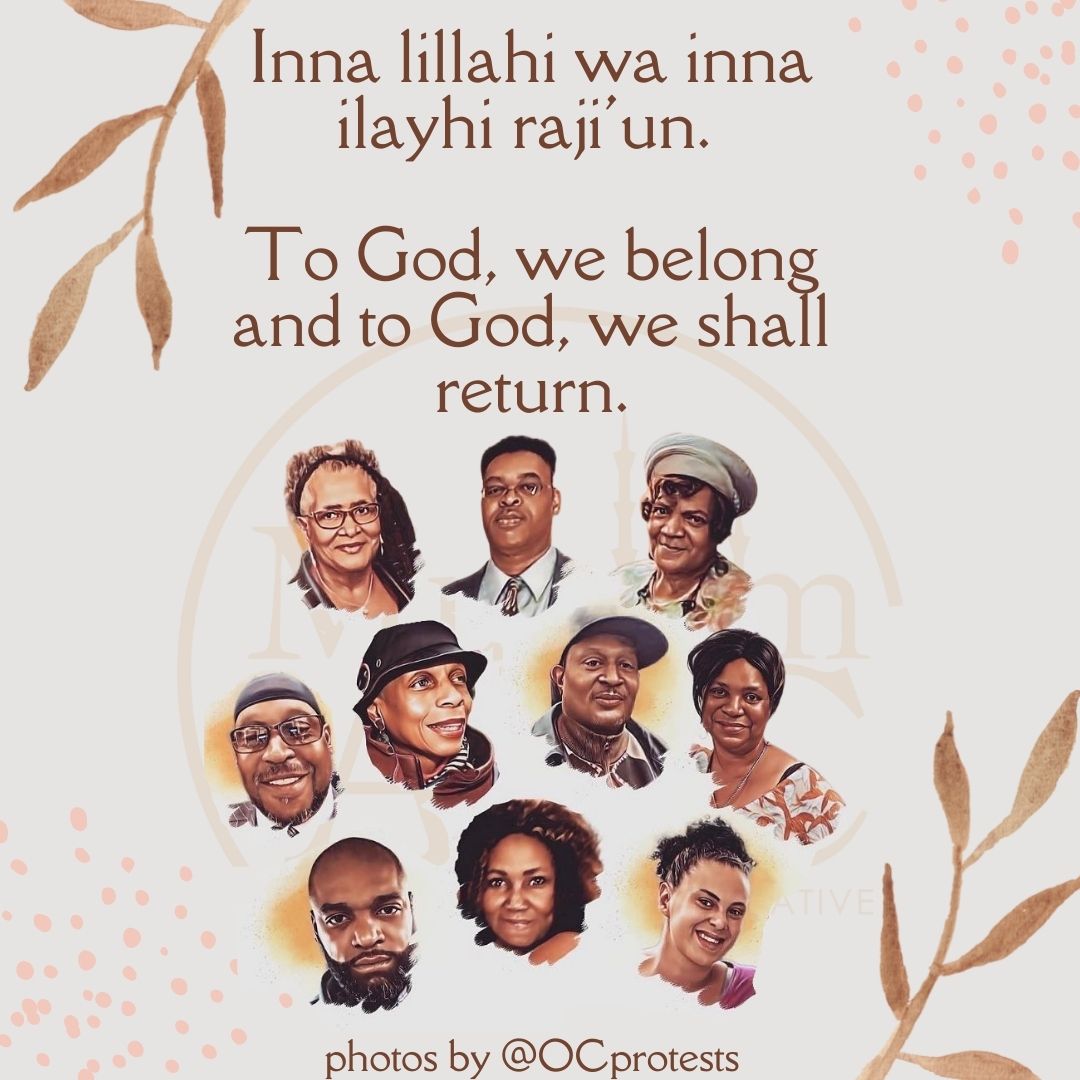 Ethno Nationalism is against our creed: MuslimARC's Statement on Saturday's Buffalo shooting

Ethno Nationalism is against our creed.  Inna lillahi wa inna ilayhi raji'un. To God, we belong and to God, we shall return. Our country is once again in mourning.  On Saturday, May 14, 2022, an 18-year-old self-proclaimed white supremacist traveled hundreds of miles to Tops Friendly Market in Buffalo, New York, and murdered 10 people and injured 3 others.  The suspect posted a racist manifesto about his white supremacist ideology and plan to attack the Black community and live-streamed the mass shooting. Our prayers are with the victims, Ruth Whitfield (86), Roberta Drury (32), Aaron salter (55), Heward Patterson (67), Pearl Young (77), Geraldine Talley (62), Celestine Chaney (65), Katherine Massey (72), Margus Morrison (52), and Andre Mackneil (52), survivors, and the Buffalo community.

MuslimARC End of the Year Report 2021 This year, MulimARC wanted to celebrate 7 years of excellence by showing our impact as an organization. We have entered new territory this year and our planning has paid off. 8 new Anti-Racism trainers, thousands of people trained, and a whole new staff to inject new energy into our work. It is all thanks to the countless volunteer hours and generous donations that have allowed us to reach excellence this year; and you better believe we will be doing even better 2022 and beyond.  Prepared by Margari Hill and Mohammad Raza Check out our newsletter style report below and tell us what you learned on social media! 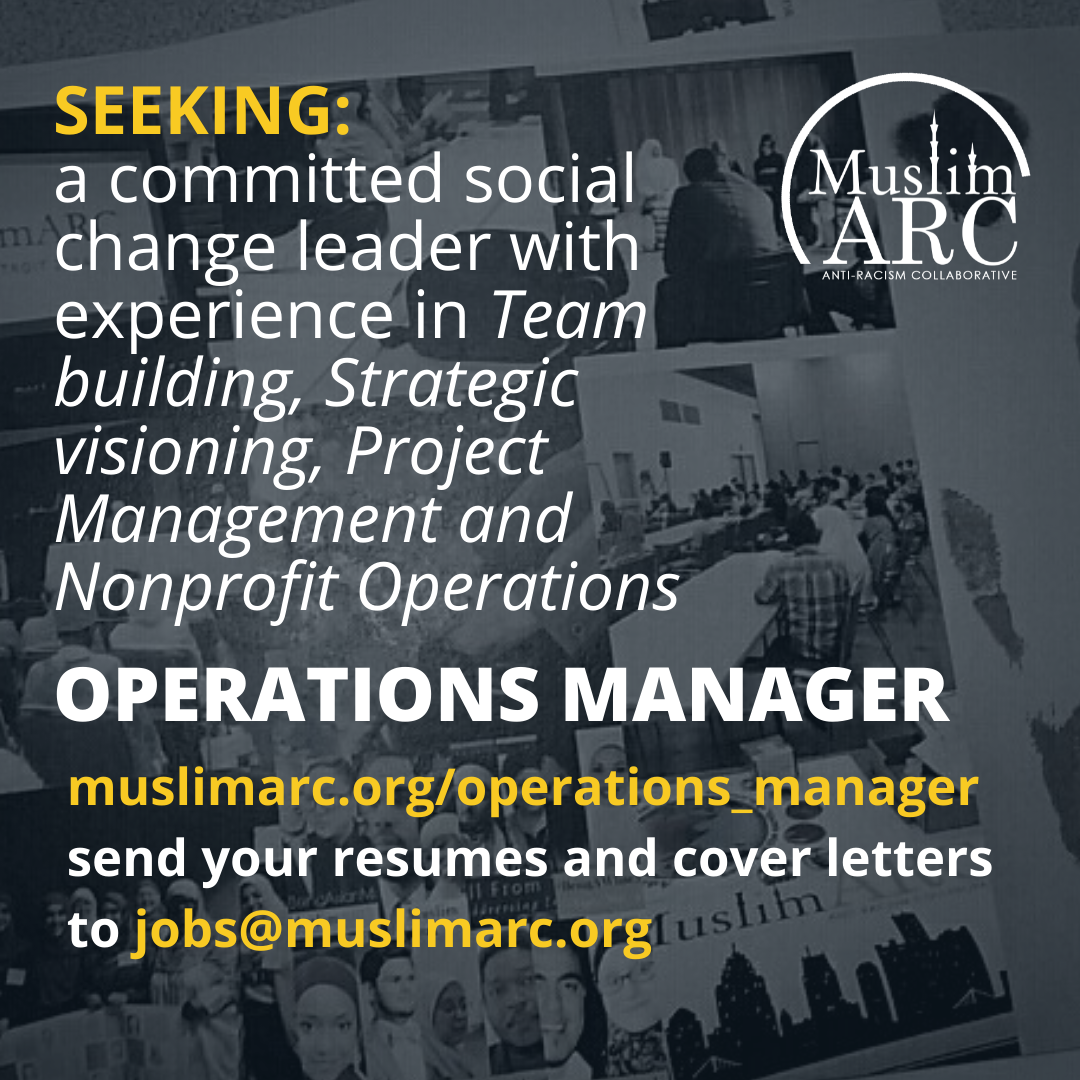 Do you want to join a team of dedicated educators, scholars, and activists across the country that are tackling issues of racial justice within and across faith communities in North America? MuslimARC is a fast-growing and dynamic human rights education organization that serves to educate and raise awareness on issues of racial justice in the Muslim community and beyond. Our organization is in its growth phase and is seeking a passionate leader who shares the same values of MuslimARC of anti-racism and human rights, a leader who will work with and support the Executive Director and the MuslimARC team in successfully expanding the organization in this new phase. We are looking for a fast-paced and collaborative individual who has a deep understanding of the Muslim community and its racially and ethnically diverse members is passionate about fostering an inclusive work environment and is enthusiastic about elevating the organization’s impact on racial justice through building and executing the best practices for the Operations Department. 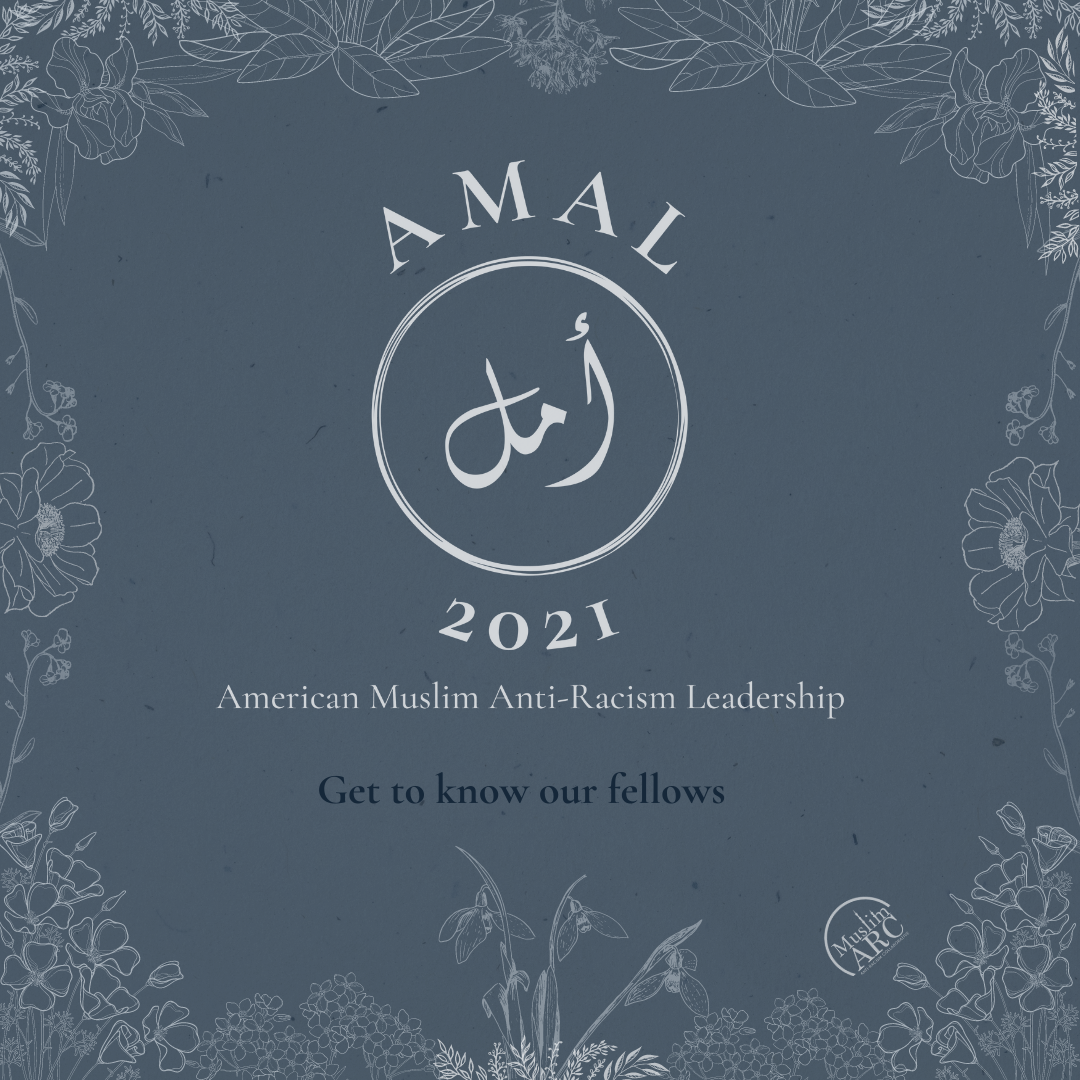 Introducing our 2021 AMAL Fellows We are extremely proud and honored to have such a dynamic group of individuals in our fellowship program.  The goal of the AMAL fellowship is to identify committed MuslimARC Members and invest in them as emerging leaders who will expand MuslimARC’s capacity to deliver anti-racism training. The program is designed to train a cohort of MuslimARC-licensed facilitators to expand MuslimARC’s anti-racism workshops and seminars to even more cities across the country in 2021.  We believe that we have chosen fellows that will help us realize this dream:

On March 16th, 2021, a gunman killed eight people at three different spas in North Georgia. Six of the victims were Asian American, and seven of them were women. This mass shooting occurred during a time when Asian American communities have faced escalating hate crimes. This white supremacist misogynist attack exposes gendered violence that Asian women have endured for generations. 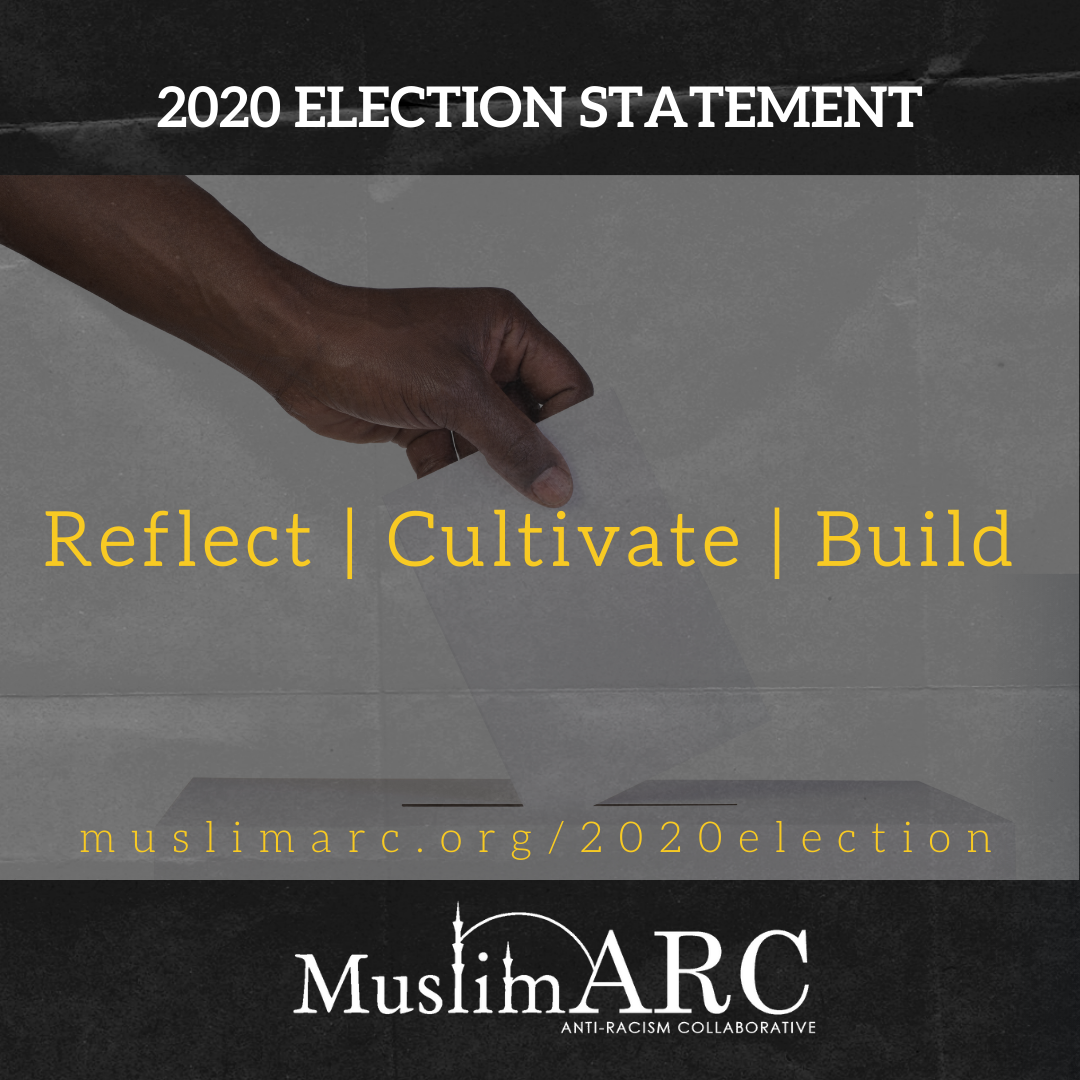 Imam Ali (AS) said, “Speak the truth, and do good deeds to secure a good reward, and be adversaries to the oppressor and those who aid the oppressed.” We live in a time where the political climate of fear fuels racism, Islamophobia, and xenophobia across the country. According to the APA, the 2020 Presidential Election is a source of significant stress for more Americans than the 2016 Presidential Race. As an organization that provides anti-racism education and resources to advance racial justice, we want to focus on how the elections will impact our society's most vulnerable. MuslimARC recognizes the importance of fulfilling our Creator’s mandate to fight oppression through sacred resistance and build solidarity with marginalized communities, for whom this anxiety is even greater.  Let’s use this time to rethink our strategies and work harder toward our collective goals. We will get through this. 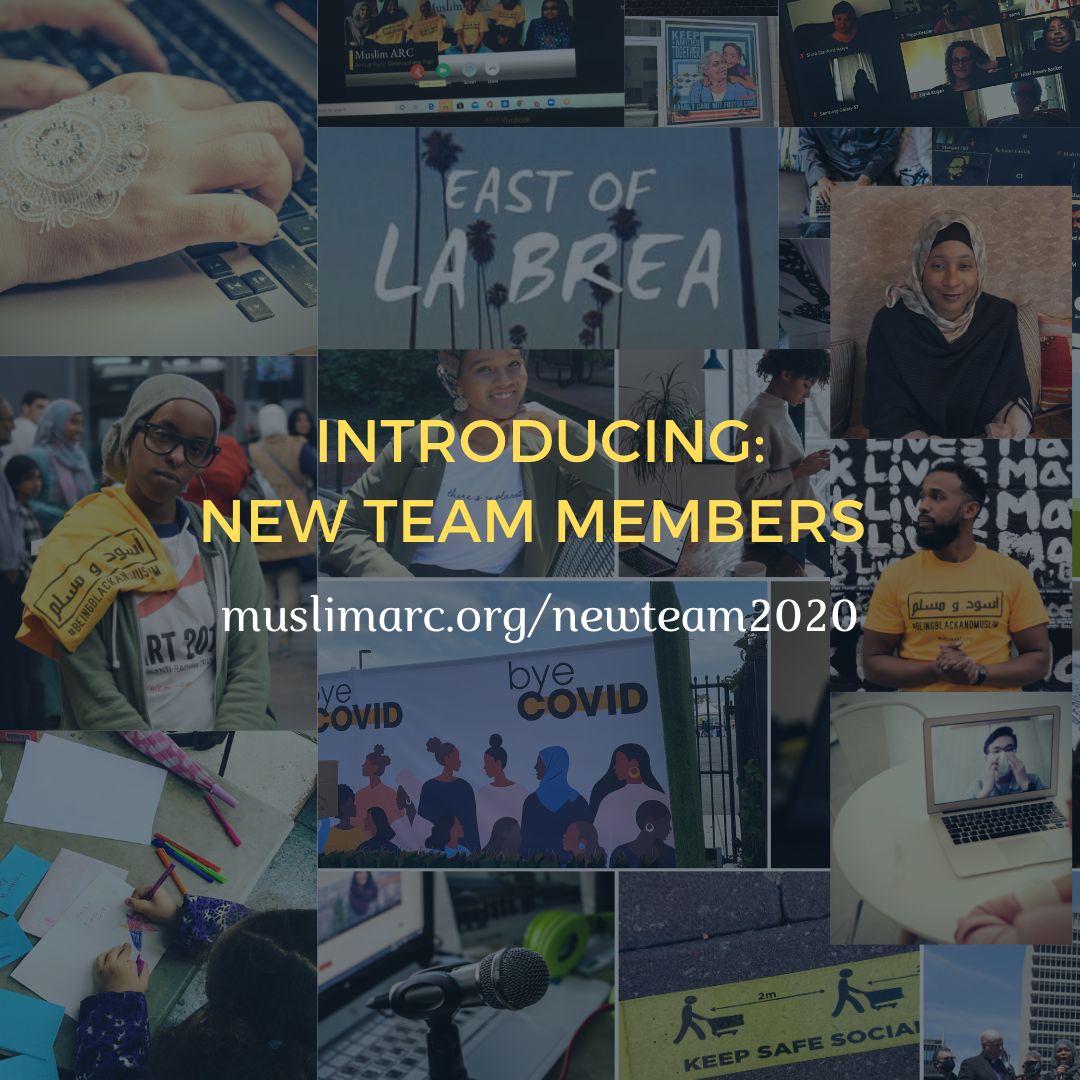 We are grateful to the immense trust our supporters have shown MuslimARC as calls for racial justice and anti-racism training reverberate across the country. We are thrilled to announce the next stage of our journey in cultivating anti-racism leadership with the addition of our Operations Director, Kenyatta Bakeer, and Operations Assistant, Shams Hamid. These new positions will help ensure that we are responsive to the growing call for our work. 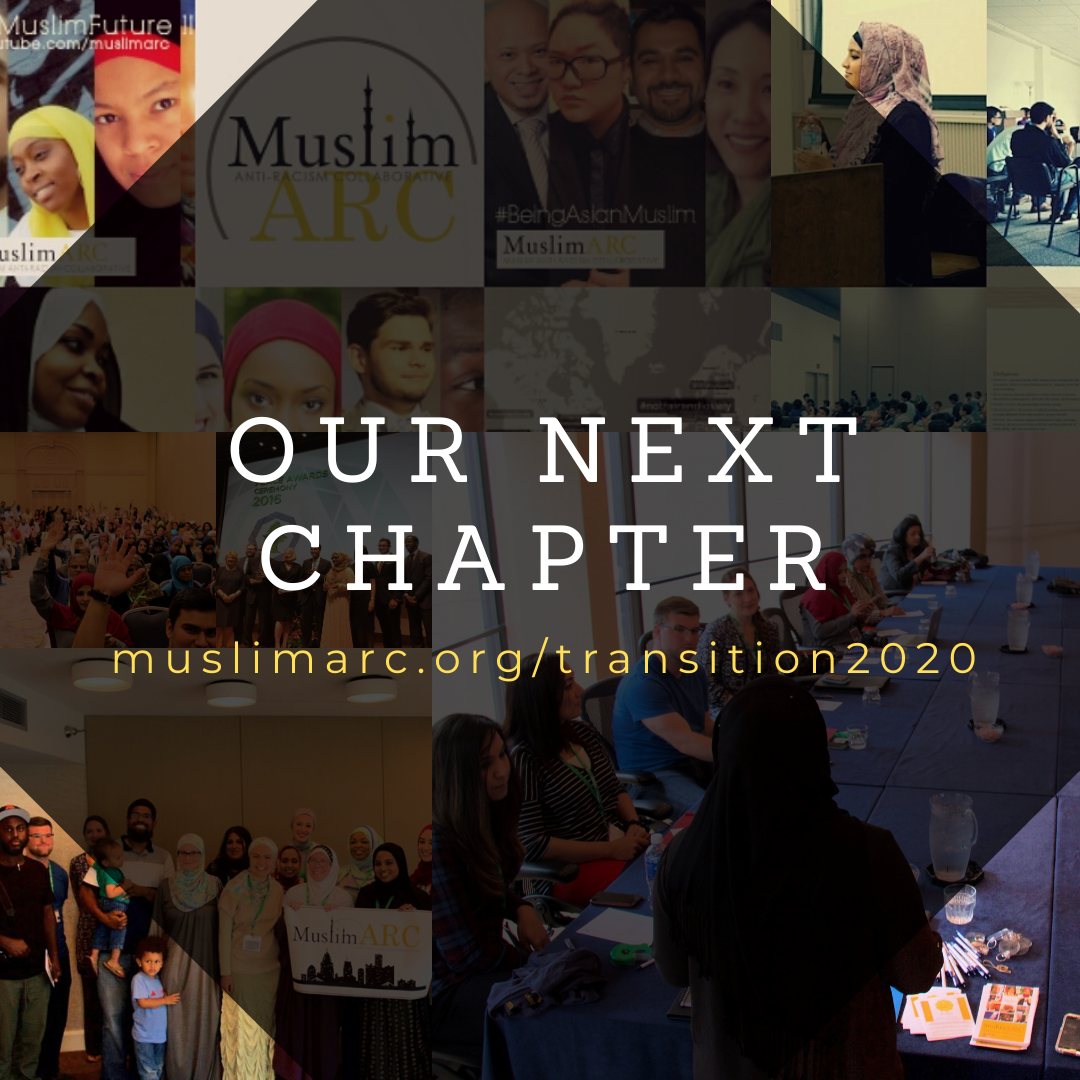 Our Next Chapter: Transitions at MuslimARC

From Co-Founder Namira Islam Anani Greetings of peace. I'm writing to you with some news: this week, I am transitioning out of my role as Community Engagement Director and into a board position at the Muslim Anti-Racism Collaborative. It's been my honor these last six years to build MuslimARC from the ground up into an organization that creates spaces for learning, connects multi-ethnic networks, and cultivates solutions for racial equity.