The Muslim Anti-Racism Collaborative is based in Southern California and Metro Detroit.

Become a MuslimARC Member today to get access to members-only events on the ground in these cities and other locations across the country.

Check out the work happening in Detroit at:

The Muslim Anti-Racism Collaborative (MuslimARC) just bought a house in Detroit! After nearly 4 years as a virtual organization, we are now taking steps to own our own brick and mortar space. We took this big step while commemorating the 50th anniversary of the 1967 Detroit Uprising. We joined efforts with the Dream of Detroit  and for just $1,000 purchased a 100 year old abandoned building. The ARChouse will be a space where we can effectively address institutional racism, the marginalization and criminalization of communities of color. MuslimARC’s neighbors include working class families, the Muslim Center, the Dream of Detroit office, the renown Detroit Repertory Theatre,the Huda Clinic and Huda Community Garden, an Artist residence, as well as open lots and abandoned properties.

MuslimARC advisor Hazel Gomez wrote, “Our task, if we’re to remain relevant to society at large, is to create viable, urban, multi-ethnic, Muslim-led, values-based communities.” We support the model of  Kenny Luqman Gamble’s Universal Companies which have revitalized South Philadelphia, MacArthur Genius Award winner Dr. Rami Nashashibi of Inner City Muslim Action Network (IMAN), and Mark Crain of Dream of Detroit all contribute to Muslim Urban Justice. Our curriculum draws on their example, as well as our faith values and historical models, such as  7th century Yathrib to  African and indigenous Maroon communities, to support freedom and dignity. 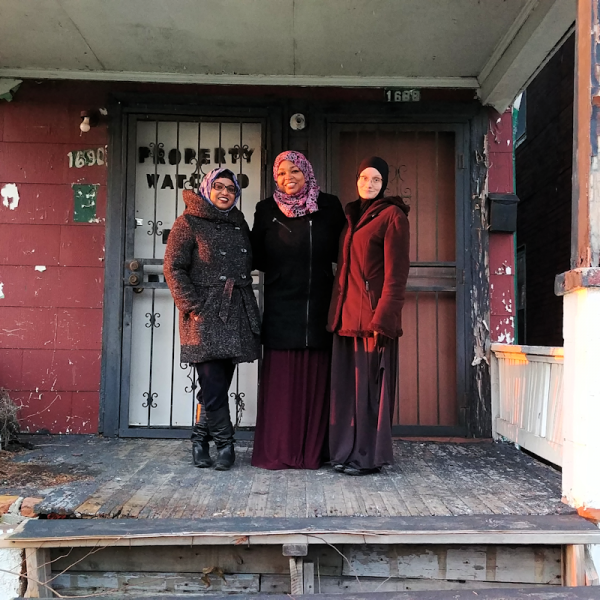 The 1900 square feet house is a duplex with two units (one on the ground floor and one on the second floor), and has a full basement and attic that we will be able to use.

We are working to outfit the house for the following:

This space is a community space, and as such, we want to include people from far and wide in building and creating the MuslimARC House. Through art and community good-will, we hope to have a warm, inviting space for people to create, connect, and cultivate.

The total estimated cost for the rehab is $84,000. Here are the specific funding needs:

We are so excited to provide trainings to leaders in partner organizations, support collaborative neighborhood development projects, and offer service learning residencies for MuslimARC fellows and interns. Thanks so much to our generous funders, sponsors, and over 200 online donors we’ve passed the campaign’s halfway mark. In this political climate, we need more wins and positive stories about Muslims making a difference. Let’s get the buzz going and make this campaign successful by sharing on social media. Donate and sharing with your social network why you support MuslimARC. Donations to MuslimARC are processed through Allied Media Projects, a 501c3 tax deductible organization. Be sure to make your check out to Allied Media Projects and write “MuslimARC” in the memo line.  You may mail checks directly to us at PO Box 577 Southfield, MI 48037. You can donate online from this website below:

Can This Muslim Community Create a Model for Rebuilding Detroit?